Were you spanked as a child?  Do you spank your child?  Afterward, do you feel guilty and wonder if there could be a better way to discipline your child rather than hitting?  Maybe your family and friends have told you the guilt is normal, and it hurts you to spank more than it hurts your child.

Maybe the culture or church you grew up in believes in spanking? However, there’s something in your gut telling you spanking isn’t right.  I’m going to share with you 10 reasons to stop spanking that I beleive to be worth the work it takes to stop.

Whatever your case, if your answer to any of these questions is yes, I want to share some moral reasons and research-based reasons you should quit spanking your child.  The way your family did things does not have to be the way you do things.  You can stop the cycle.

Ultimately, you decide what you believe to be right for your family.  I encourage you to make an educated decision not solely based on opinion.  You can change your family’s legacy from spanking to one of problem-solving.  Essentially, you will strengthen the emotional health of your family.

PIN NOW & SAVE FOR LATER 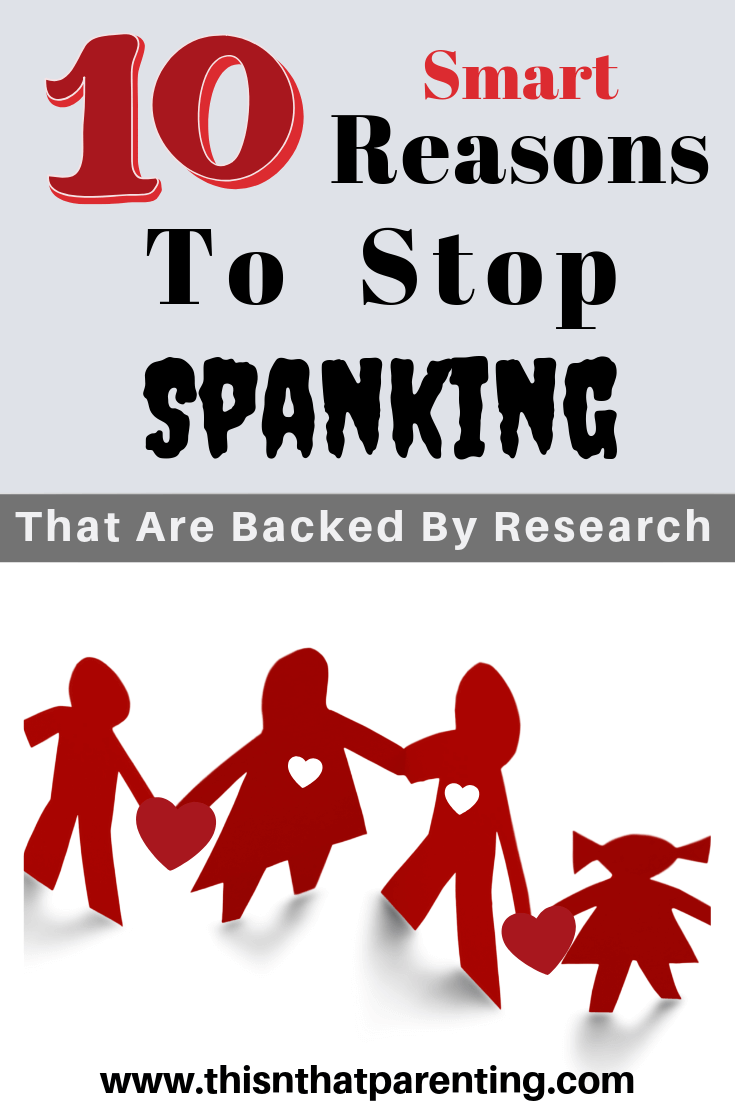 Spanking is a controversial topic.  I’m not here to argue or tell you what to do.  I’m here on behalf of your child to ask you to read this article with an open mind. My job is to deliver the facts that research and child development prove. If you continue spanking your child, no judgment against you.  I believe that quitting spanking is an evolution for families. If not you, hopefully, one of your descendants will stop the cycle.

The research on spanking is now more accessible and new research is out compared to when we were growing up.  The laws in the United States permit parents to spank their children, and they leave it up to the states for the “specifics” of discipline.  19 states in the U.S. still allow for schools to enforce corporal punishment, and most of those are in the south.  60 countries and territories in the world have laws that make it illegal to spank your child.

Questions To Ponder About Spanking:

Spanking Research to Consider When Deciding to Spank or Not to Spank:

My husband and I started out spanking our child, but after much research, we decided that it was not the family culture we wanted.  My husband and I quit spanking because of the reasons to stop spanking I share with you.  I want to add that there is much more information and research that I could add, but out of respect for your time and mine, I chose the following because I believe them to be the most powerful.

First, brain research shows that the human prefrontal cortex is not fully developed until around the age of 25.  Studies show children receive the most spankings between the ages of 3 and 6.

Consequently and alarmingly, child development and brain development facts show that most of the reasons these children are being spanked are for the exact things we should expect them to do at these ages.  Their decision-making skills are not developed.  Hitting a child will not improve brain development.  If anything, it will hinder.

Next, if a child is seeking attention even at the costs of getting a spanking, this can merge the concepts of pain and pleasure in a child’s mind.   The Journal of Pediatrics reported that researchers at the University of Texas found a link between corporal punishment as a child and dating violence as an adult.  For more on this topic, see “The Sexual Dangers of Spanking Children”.

“Every time you think of calling a kid ‘attention seeking’, consider chagning it to ‘connection-seeking’ and see how your perspective changes.” Dr. Jody Carrington
#3. The Long-Term Negative Effects of Spanking

Although many parents are unaware of it, continual spanking can have long-term negative effects.  A 2012 study reviewed and confirmed researcher, Dr. Elizabeth Gershoff‘s findings. Kids who get spanked have less gray matter in their brains. Further, they are more likely to exhibit poor mental health including depression, anxiety, antisocial behavior, alcohol abuse, drug use, suicidal tendencies, and aggression.  Source

For me, #3 alone gives enough reasons to stop spanking to get me to stop.  But I’ll go on, since there are plenty more.

The American Academy of Pediatrics most recent recommendation is for parents not to spank.  The AAP recommends that adults caring for children use healthy forms of discipline, such as positive reinforcement of desired behaviors, setting limits, redirecting, and setting future expectations.

The AAP recommends that parents do not use spanking, hitting, slapping, threatening, insulting, humiliating, or shaming.  In fact, you can find in-depth research and detail on spanking on the AAP site. 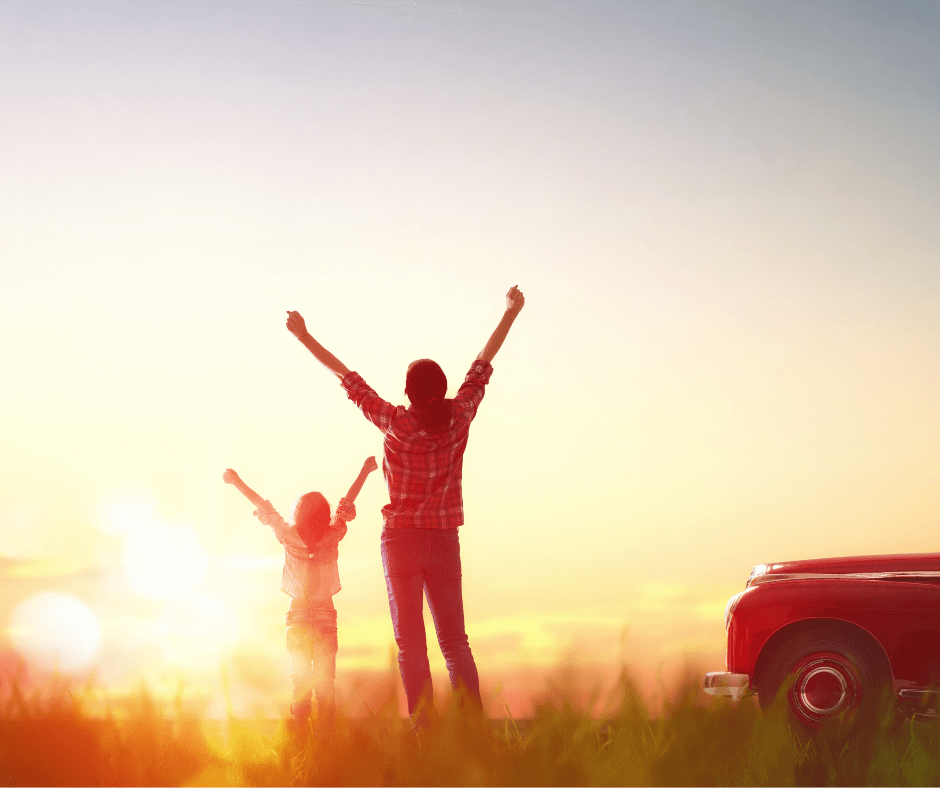 #5.  There’s No Research to Back Spanking

Meanwhile, no study or research has proven spanked kids are better behaved or grow up to be equally healthy emotionally. Source

#6.  Spanking Does NOT Solve Problems

Children who get spanked only quit performing the offense temporarily.  Not to mention, the child stops the behavior due to fear. What about learning to do what is right because it is right?  In the long run, these children become sneaky or lie, so they won’t get caught.

Because children learn through parental modeling, physical punishment gives the message that hitting is an appropriate way to express feelings and to solve problems.  Spanking does not teach an alternative behavior or a better way to behave. The intent of parenting is to teach self-control.  Spanking is the lowest level of moral development.   Source

#8. Do You Remember How You Felt After Being Spanked?

The response I keep hearing is, “Well, I got spanked, and I turned out okay.”

I’m not talking to parents who want their kids to be OKAY.  I’m talking to parents who are trying to raise great humans with strong mental and emotional health.  If you were spanked, you might be okay, but your mental health could probably be stronger had you not been spanked. And how’s your anxiety, sobriety, and aggression?

Without a doubt, spanking not only erodes the child but the parent-child relationship.  Children will never forget how you made them feel.

#9.  Behavior is a method of communication.

You need to know that the child who needs the most attention or connection will perform the most “dramatic” behaviors.   Instead of trying to change or stop the behavior.  Try to figure out what causes the behavior.  What does the child need?  Meet your child’s needs. 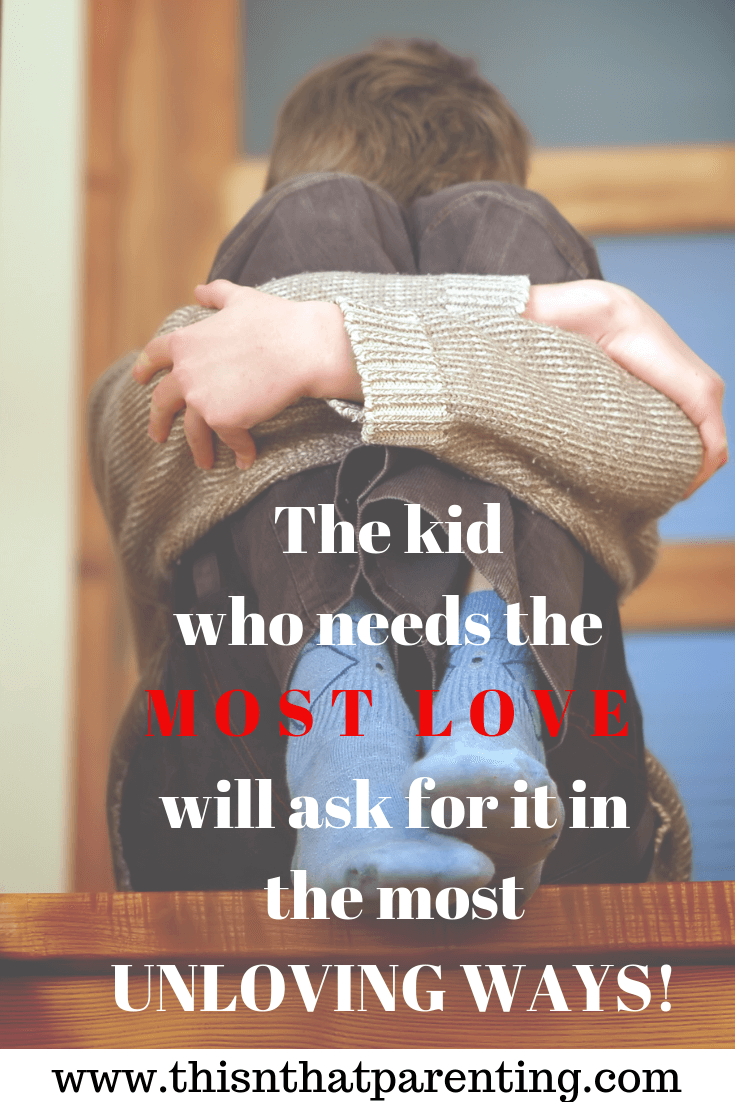 #10. Does the Bible Tell Us to Spank?  Spare the rod, spoil the child is not in the Bible.

Last but not least, the United States has the largest Christian population in the world.  Sadly, we also have one of the largest spanking populations.  Some Christians use the verses in Proverbs as a justification to spanking children.

Many Christian leaders teach that parents should spank their children.  Most of what they instruct is their opinion.  Maybe you experienced this in your church.

I want to reveal to you that there are plenty of Christians leaders who do not interpret these verses to mean that parents should spank their children.  To learn more, I highly encourage you to download and read Thy Rod and Thy Staff They Comfort Me: Christians and The Spanking Controversy by Samuel Martin for free.

As you can see, the negative effects of spanking far outweigh the benefits of spanking if you have your child’s best interest at heart.  They say we do better when we know better.  If you read the ten facts above, you now know better than to hit your child.  It’s up to you to take educated action to do better.

Use these 10 reasons to stop spanking to be a fresh start for your family.  Change your legacy.

I want to challenge you to consider your own self-control.  What if instead of judging your child’s behavior, you hold yourself accountable for maintaining emotional control and self-control when your child behaves in a manner you don’t care for?

Related:  How to Stop Spanking

Dr. Laura Markham states, “Your first responsibility in parenting is being mindful of your own inner state.”  When these misbehaviors are happening in your family, someone needs to stay in control.  It is only natural that we should expect it to be an adult.  I want to mention again that hitting is the lowest form of control.

If you stop spanking, it is no easy feat.  The more you use spanking to discipline your child, the harder it is to stop. But I am here to tell you it is so worth it. There are many families who are a testament to the fact that you can raise amazing children without spanking.

Above all, the amount of self-control and personal growth it takes for a parent to stop spanking, the trust and connection you will gain with your child, and the impact you are making for your decedents is all well worth your efforts – a hundredfold.

Simple Ways to Advocate for Your Child in the Healthcare System

Know YOUr Self-Identity – Get Back to YOUr Roots

21 Ways to Say I Love You to Your Child