How much thought have you given to the research on self-fulfilling prophecy? This research can be significant in your parenting.  You see, we buy into a story.  How we live and the decisions we make in our life are a result of the story we bought into.

Furthermore, research says that the things that we saw, the things that we experienced, and the conversations we were exposed to between ages 0-5 govern most of the way we live as adults.  With this in mind, it is worth our effort to be intentional about the verbal and nonverbal communications we have with our children.

This is part of the reason it is said, “The way we talk to our child becomes their inner voice.”

The good news is that if we are intentional, humans can rewrite the story that we believe.  We can change our ideas such as I’m not good enough, fast enough, rich enough, smart enough, I’m not organized enough, skinny enough, whatever you need to rewrite. You can change your mindset.  You can even help your children to change their mindsets.  It is NEVER too late!

As parents, you must remember that when you say to your child, “You are…” or when you say about them, “He/She is…”  They will be exactly that.  Expect it.  Expect it every time because that is what you are sure to get. 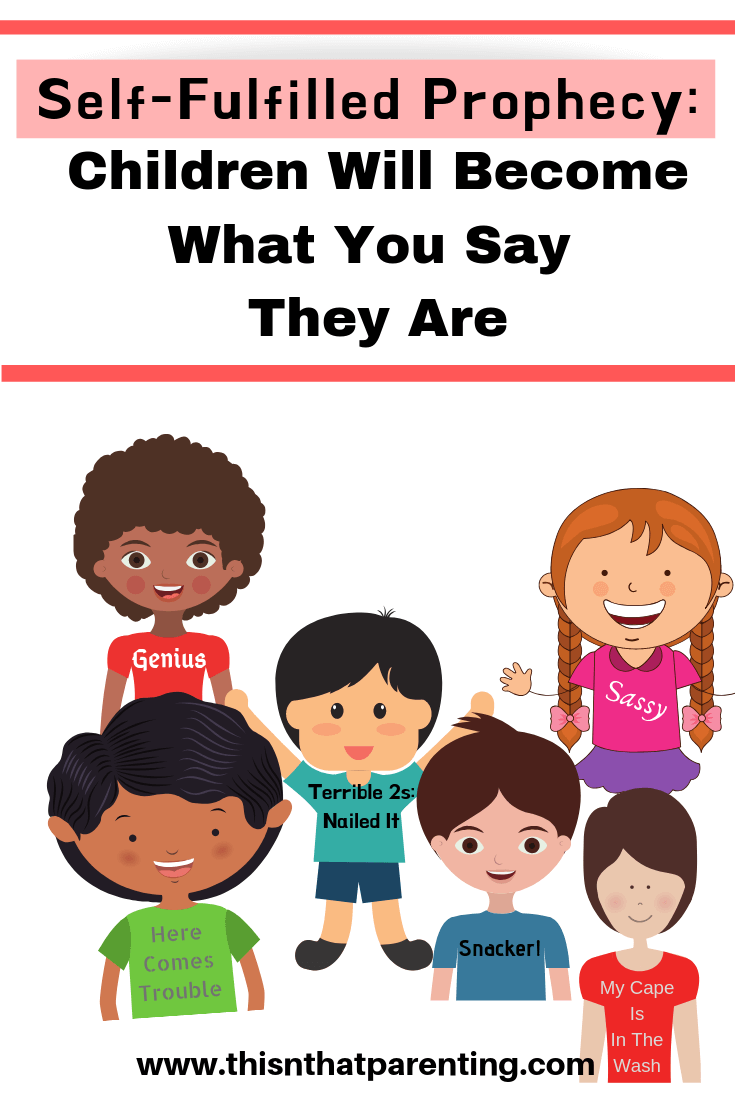 When I attended the College of Education at Texas A&M in the 90s, a professor shared a definition and some research that would forever change my life.  She taught us about the different types of self-fulfilling prophecies.  I am going to pass along to you the information I believe can be most influential in your parenting.

The Placebo Effect:  Research on the placebo effect has focused on the relationship between mind and body. One of the most common theories is that the placebo effect is due to a person’s expectations. If a person expects a pill to do something, then it’s possible that the body’s own chemistry can cause effects similar to what medication might have caused. (source)

Theory of Robert Merton:  Merton noticed that sometimes a belief brings about consequences that cause the reality to match the belief. Generally, those at the center of a self-fulfilling prophecy don’t understand that their belief caused the consequences they expected or feared; it is more unintentional effect than self-motivation or self-confidence. (source)

Rosenthal and Pygmalion Effect:  These studies were done in classrooms with teachers being told certain untrue things about their students.  This led to researchers finding the same results time and again. “When we expect certain behaviors of others, we are likely to act in ways that make the expected behavior more likely to occur” (Rosenthal & Babad, 1985).

Self-Fulfilling Prophecy Can Be Positive or Negative

Positive:  “Fake it till you make it!” is good advice.

*Even consider what your child’s clothing says about them! 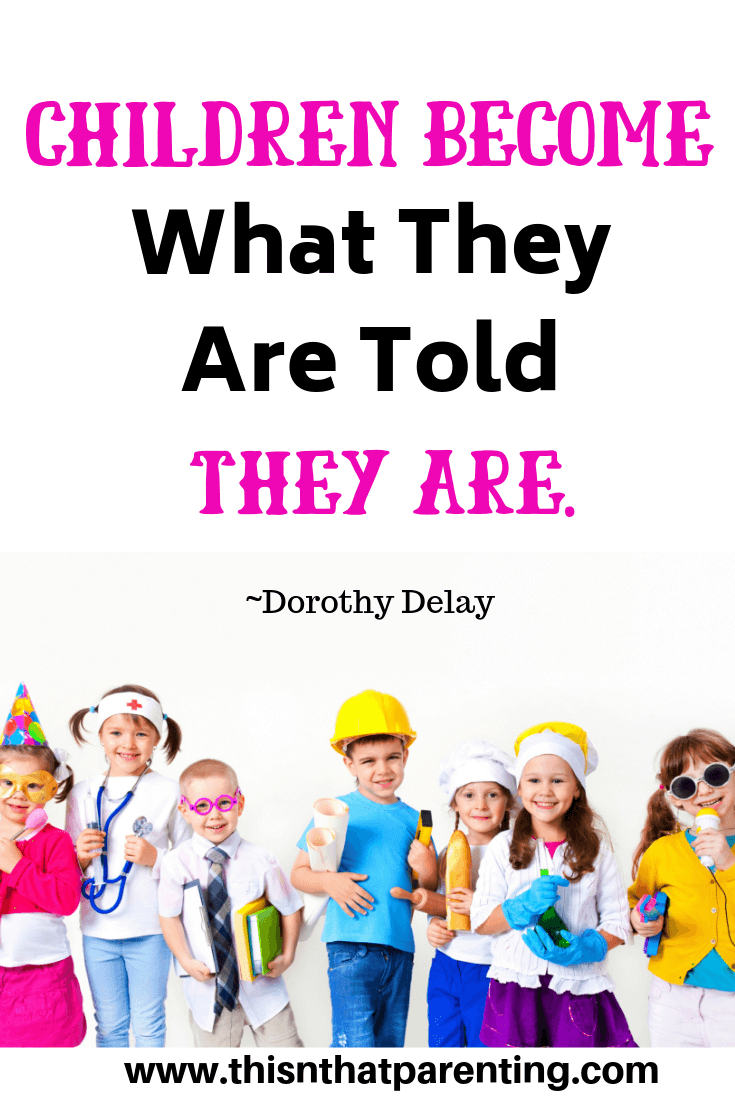 Who Is Responsible for Our Self-Fulfilling Prophecy?

Often times studies are done in schools and teachers get a bad or good rap for this, but the same holds true for the messages parents send their children.  In fact, research says that the input from ages 0-5 has the most impact.  After that, we are either adding to or trying to rewrite our belief systems.

When we are young, it is our caretakers and those we are in the most contact with responsibility as to what we are exposed to. Once we are adults, it is up to us to decide what we let in.  Just the same, it is our responsibility to change the story that our caretakers exposed us to.  Every person will have things from their childhood that does not serve them well.  That is just a fact of life.  Don’t spend your time in blame or shame.  Use your time healing and creating a new legacy.

As parents, let’s be intentional about giving our child the least amount of reasons to have to seek counseling.  As the This -N- That Parenting slogan goes, “Try not to wing building wings!” 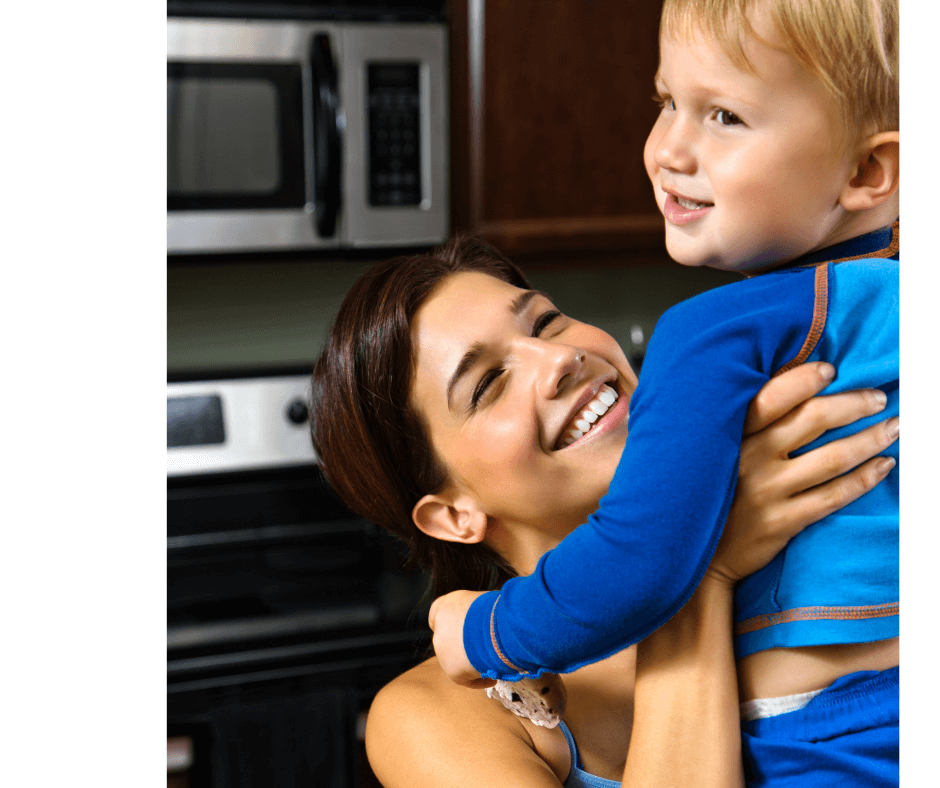 Self-Talk Is Part of Self-Care – Model It!

At the same time, our self-talk has a huge impact on our decisions and performance in everyday life.  For isn’t it that chatter in our heads that can most often make or break us?!  I believe the following quotes speak to the importance of our inner conversations.

Once I learned about self-fulfilling prophecy in college, I knew I would use it in the classroom.  I did in many ways, but today I’ll share how I used it for 15 years in response to the Pygmalion Effect.

On the first day of school, I would tell my students something to this effect. “I know ya’ll probably already heard about this in 4th grade, but just in case you missed it, I’m going to let you in on a secret today.  Now first I want to say, please don’t go telling all the other kids about this because there are other kids who should be in here too, but we only have x spots in this class.  Every year the highest achieving and hardest working students get put in my class because Ms. Principal knows that I do the best job challenging and working with these types of students.  Students like you!

Now at this point, I don’t know whether to laugh or cry because some of them actually start looking around like, “How the heck am I…?”  Long story short, I’ve had tons of students make the most gain in their academic history and pass things they have never passed before.  I’m convinced it’s because of the relationship I build with that child while nurturing the belief THEY CAN AND WILL!

Another thing I told them on the first day is, “Every year my class wins first place at the Field Day competition and ya’ll will too!”  Every year, they did.

I knew a child whose mom, for whatever reason, would often tell him, “You’re going to get someone pregnant and end up dropping out of school.  I know for sure she was already telling him this when he was 10.  In my honest opinion, there was nothing about this child that should have caused someone to assume this about him.  Guess what he did.  Exactly that!

I have a family member who was verbally abused by his parents.  He was called dumb, won’t amount to anything, called cuss words, stupid, we had to get married because of you, you were an accident, etc. etc.  He has been in and out of prison, and often uses drugs.  I pray he takes the initiative to change the story in his head!

I’m not sure either parent in these examples has thought twice about the self-fulfilling prophecy.

With all that I know and love about self-fulfilling prophecy, I mess up with this all of the time.  I’m going to share a personal story of how my beliefs hindered my child and our relationship.

Jock takes piano lessons.  It got to the point where practicing with him was absolutely miserable.  As in I would rather take a cold bath than have to practice with him miserable. But every weekday I pressed on.  I dreaded telling him it was time to practice.

What was supposed to be a 15-minute lesson, would be 20 minutes of drama, then 15+ minutes of practice.  I saw a kid who is usually super happy and positive act in ways I’d never seen him act/fit before. I often complained to Chris about how grueling the lessons were.  The things I thought before, during and after practice I’m ashamed of.  At some point in the lesson, one of us would usually get angry, and afterward, it would take quite some time to reconnect.

Then one day, I decided this can not continue.  I prayed about piano time, and I asked God to give me wisdom.  In the days afterward, self-fulfilling prophecy kept coming up when I thought about piano lessons. I started to repeat to myself, “Jock loves piano lessons.”  I say it to him every now and then too.  Later, Chris and I decided the teacher had him at complete frustration level, and I took him 3 books back.

Guess what.  Now, whenever I say, “It’s piano time.”  Jock has cooperated at appropriate age-level.  Knock on wood, the past scenarios have dissipated.  I truly believe I had a mindset that was manifesting a disastrous practice time.  Within days of making a conscious effort to change our mindsets, our piano lesson turned around for the better which caused a positive domino effect. I’m not trying to brag, but often times, when we’re in public, people ask me how I get my kids to behave so well.  Believe me.  We have our moments, but for the most part, it’s fine.  I even have parents say, “How do you get him to do that?  My kid could never do that.  That’s why I left him at home with so and so…”  The truth is, we just expect it. There’s always variables, lack of sleep, hunger, growth spurts, teething, but for the most part, you get what you expect.

I truly believe all parents want to do the best job they can for their child.  I know you do and I do.  Unfortunately, sometimes our words and actions don’t always reflect that.

Our verbal and nonverbal communication is shaping our child’s belief system that they will carry with them for the rest of their lives unless they work to change it.  We may not see an effect the moment we communicate something, but we are planting seeds.

Because our thoughts and verbal and nonverbal communication have power, we clearly have to be intentional about the messages we send to our child.  Let’s focus on sending positive messages.  The more we focus on it, the better we will do.  Say to yourself, “I will empower my child with a positive self-fulfilling prophecy.”

Reflect on some areas you’d like to see improvement in your child.  How can you help their mindset?  If there is a communication or thought pattern that you have sent that you wish you hadn’t, help your child change that mindset. 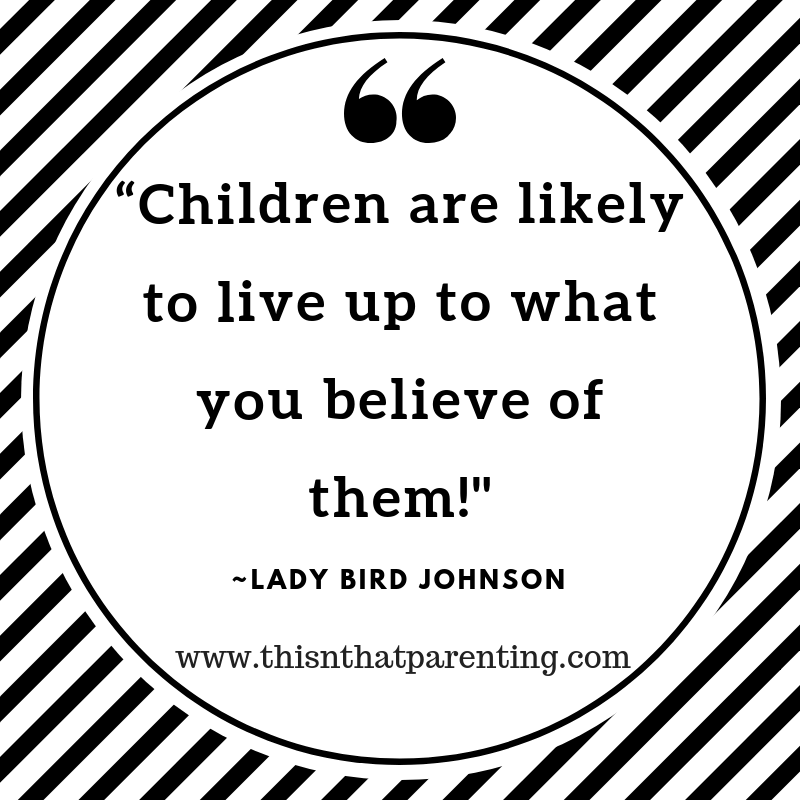 Help, I Need Childcare! (What to Look For)

Lighting: How It Affects Your Child Physically, Mentally, and Academically